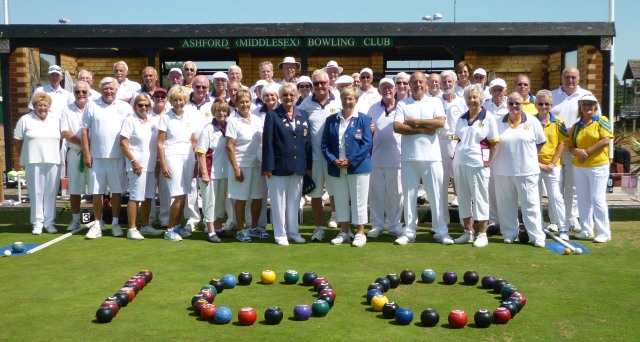 Ashford, their guest teams and the Friends smile for the camera

Another sunny and hot day to enjoy.  We arrived at Ashford to be greeted by President Marion Bushnell and a banquet layout for our lunch.  Thank you it was all very much appreciatedby all the Friends.  Some had travelled some distances to Ashford from 12 Counties namely; Beds, Berks, Bucks, Essex, Hampshire, Herts., Kent, Northants, Oxon, Somerset, Surrey and Wiltshire.  Once refreshed and with the arrival of the club bowlers we made our way to the green. Bowls were grabbed from around the rinks to make a very large and colourful 100, and then we all posed behind them for the cameras.  Rinks were announced and before the start of the game we spread around the green, one foot in the ditch for the charity spider in aid of Diabetes UK.  The winner was the Ashford Club Champion, Colin Staples, whose father before him had been Club Champion (now it gets spooky) and his father before him had been a Founder Member and yes you’ve guessed it, had also been Club Champion.  This wasn’t the first time he’d won the spider either – he’d achieved that at the Bowls England game too.  Granddad must have been guiding the bowl! 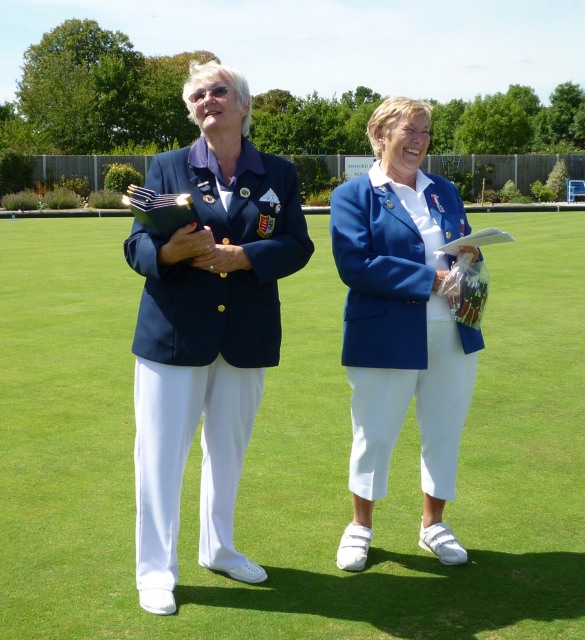 President Marion and Captain of the Day Marcia Dunstone, share a joke on the green

Two clubs, Egham & Staines had provided a guest rink each and they played in their club colours.  Staines bowling club are looking forward to their 100th Anniversary next year so an invite to the Friends for a match may well be on its way.

After the downpours of the weekend even the home players were struggling to get up the green.  President Marion had decided on a game starting with trial ends and then playing 18 ends.  There was the usual banter and joking across the green typical of our games.  It’s nice to get the win but it’s really all about enjoying the day and leaving your hosts feeling that all their efforts have been worthwhile. 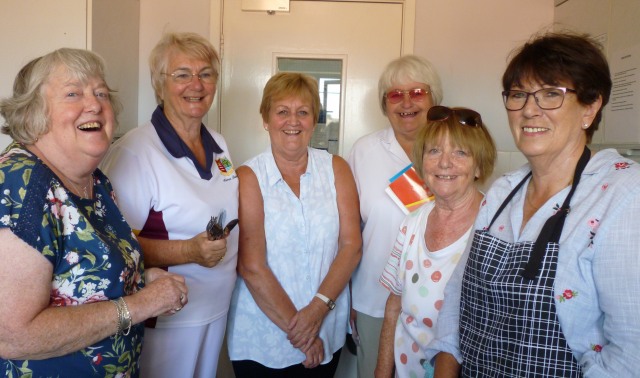 Marion disappeared after 10 ends to supervise the meal preparation and we continued with her replacement to a well deserved draw.   The results were 2 wins and a draw to us and 3 wins and a draw to Ashford.  President Marion claimed the win from that score line but I did point out if we adopted MC or JT scoring she had to give us another 10 points for the overall score so the Friends actually claimed the win.  Marion gave a very good resume of the Club’s history reading out snippets from a book produced for their 50th Anniversary.  The Club Champion turned out to be Marion’s cousin and her mother and aunt had both been County bowlers in their time.  Over the years the Club had provided 5 or 6 Middlesex Presidents including Marion, who subsequently went on to be National President in 2003 and has been the Sponsor of the Women’s Junior Pairs since 2004. It had been a splendid day for all of us, ending with lots of raffle prizes and a journey home.  Not so for our host.  Marion and partner Carole, after being on their feet all day, were going to the green to play a District Pairs…. Totally barmy!
ps. They won 20-15 and finished in the dark. 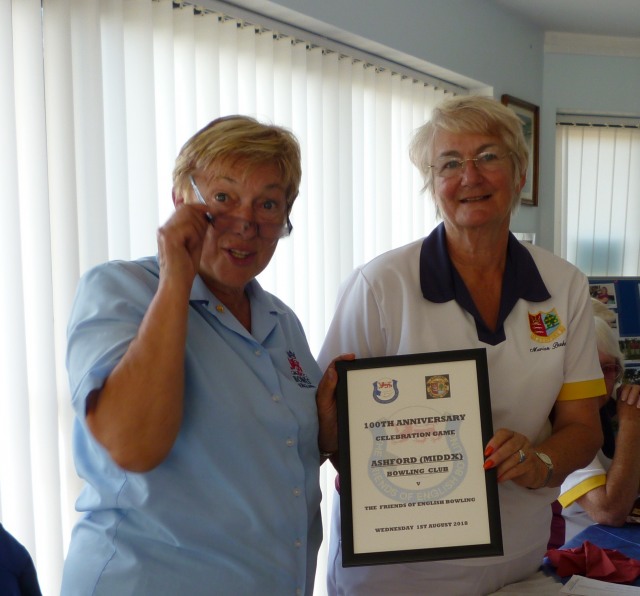 Match Result was FEB 106 and Ashford 97.
Staines four was their top rink and ours was Gordon Newman, Cyndy Lee, Michael Morris and Mick Skerry.