The Teams: centre l-r President of Wolvey BC Michael, President of Midland Counties, Aubrey, and Friends Captain of the Day, Cyndy

On Thursday September 13th players from twelve counties made their way to Wolvey to play the final game of the season. Among them, the Bowls England Presidential team consisting of Bill Smith, Hazel Marke and Paul Robson.   This was against Midland Counties which consists of seven counties.  It was also their last game of the season so both teams were keen to finish on a win.

At 12.30 the girls in the kitchen were ready to make rolls, or sausage rolls plus salad to order, at a pound a time. They were kept pretty busy by the hungry arrivals who were expecting a buffet lunch. 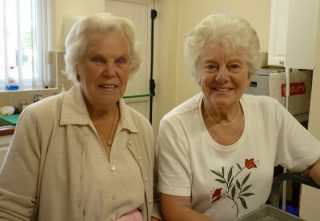 Doreen & Dorothy who made the lunch 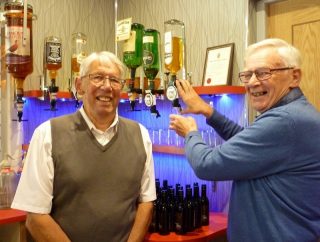 Bob assisting John at the bar

The President of the club, Michael welcomed President Aubrey Brookhouse and Captain of the day Cyndy Lee to his club and then handed the green over for the match.

When we started the game the sun was shining and it was feeling very warm. Shirt sleeves and sun hats to start. After about eight ends the sun vanished and the wind started and it began to feel rather chilly. Sun hats removed and fleeces now worn. There were a few hardy souls who managed without the extra layer.  The green played beautifully, a lovely pace. Tim, the green keeper, had done a very good job. He was cutting it as we arrived.

Laughter could be heard across the six rinks and everyone seemed to be enjoying themselves. Some more than others.

After the match we had a fish and chip supper with mushy peas.  This was followed by excellent trifles – one large bowl for each table.  They were so good that Chris Smith went round each table trying to scrounge any leftovers. 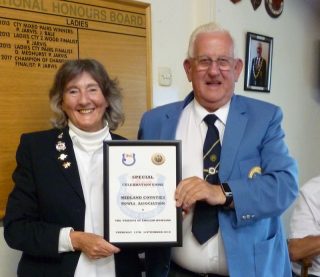 Finally a very big THANK YOU to our governor Adie Lloyd and his wife Kath for arranging all the matches and the teams.  They do a wonderful job which usually includes having to find replacements at very late notice.  We are all looking forward to seeing what has been arranged for 2019.