Adie & Kath had asked us to arrive early to meet them but miscalculation on journey time, and forgetting that no lunch was planned at this game, meant that we arrived so early we caused some surprise to Ian who was setting up the greens.   Club Captain Trevor Lofty arrived shortly after, as did Colleen the club caterer for the day so very soon we had coffee, tea and a bacon butty.  West End bowlers are rightly pleased with the extension to their clubhouse.  With valuable advice from their local Councillor and Mayor, West End had sought and gained financial assistance in various forms including a £100,000 grant from the London Marathon and grants or loans from local businesses and Bowls England.  The club now has sufficient room for 6 rinks and guests to sit comfortably after matches, and provides space for a local Yoga club to meet during the week.  They also use the club all year round and have 2 short mats for winter play.

Players from both sides arrived in time for the obligatory photographs and after our welcome by Club Captain Trevor we were soon on the green.  Trial ends, 3s up and the 21 ends planned, plus a heavier green than some were used to, meant that the break at 10 ends for tea and cake was very welcome.

Having sat out in the warm sunshine before the game, the clouds started to build and the temperature dropped quite distinctly.  Fortunately all rinks had finished and players were inside enjoying the meal before the very heavy downpour started.  It was a very enjoyable meal, provided by Colleen and Val.  Liquid refreshments were  served by Peter and John at the bar. 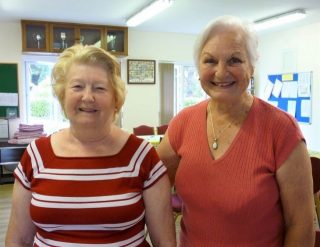 After the meal we were welcomed again by the Club Captain who expressed some surprise that Friends had travelled from so many counties and indeed one couple for over 100 miles to play in their match.  (We had players from 8 Counties namely Berks, Bucks, Hampshire, Herts., Kent, Oxon, Surrey and Wiltshire)  Although many of their members hadn’t heard of the Friends before, the match had arisen from a chance meeting by Adie with a club member whilst out in the Algarve last year.  A meeting Trevor was very pleased had resulted in this game. 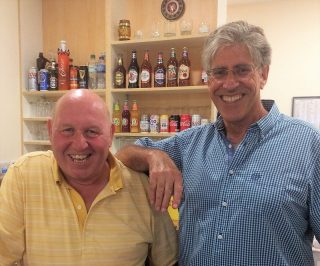 Following their toast  I responded with thanks to all concerned and congratulated in their absence, Mark Jones and Mark Dunne who had reached the Final of the National Pairs losing to a Somerset duo.  Also congratulating two club members Val and Peter (mentioned earlier) who are tying the knot later in the month.  I shared details about the Friends; the various advantages of being a member and about our annual donation to BE that they use to back many competitions and to help young bowlers, as well as our continued support of Disability Bowls.   Perhaps in the future we will be welcoming some of  their players as new Friends. 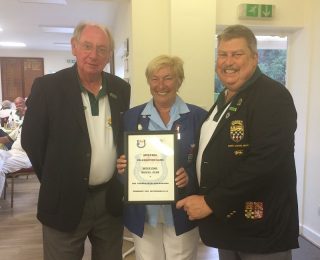 Marcia Dunstone
Captain for the day