Hykeham & Friends standing proud before the game on blue ‘turf’

Another day of torrential rain in Lincolnshire and our game at Hykeham BC was in jeopardy, however with his magic touch Adie Lloyd cleverly negotiated with Lincoln & District Indoor Bowling Club and for the second day running The Friends played their game in the dry!    We were initially met at Hykeham’s clubhouse and were welcomed with a warm drink before we moved on to the indoor venue.   Whilst the Friends’ performance improved from yesterday, we were still out-manoeuvred by Hykeham our hosts,  who had a convincing win, captained by Ernie Broughton. 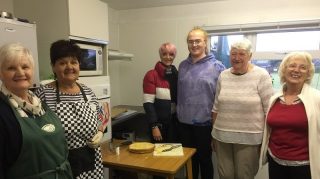 It was still raining as we made our way back to their clubhouse after the game, but the fellowship as always after a game was second to none, and we tucked into our tea provided by June, Jenny, Helena, Toby, Sue and Sandra. 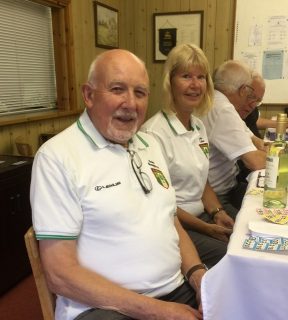 The Chairman of the club, John Wilcock addressed the players, warmly welcoming Friends of English Bowling and apologising for the dreadful weather we were experiencing in Lincolnshire!  Adie Lloyd, our Captain of the day, in his reply thanked the club for their hospitality and was pleased to congratulate Hykeham’s highest rink –  Billy Cook, Nick Daniels, John Scholey & Jeff Barlow. 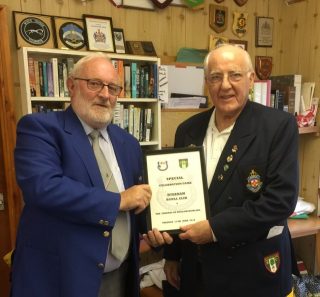 Adie presenting Chairman John with a reminder of our day together

Adie went on to present John with a framed certificate in celebration of our day together.

It was still raining when we all left the clubhouse…..  we really must come back and see Lincolnshire in the sunshine!