Friends gathered together to celebrate this club’s achievement as The Bowls England Runner- up Club of the Year 2018, on a bright sunny day on the Sussex coast.  We turned off the coastal road away from the white cliffs down to a sports park, where the club members were ready to welcome us.

We soon learnt that we were also celebrating the life and achievements of Philip Armstrong, who had initiated and worked hard for the club’s entry into this Bowls England competition, and who had passed away last month.

After a buffet lunch, photographs and a minute’s silence in memory of Philip, our game of bowls began… that is battle, laughter, good/bad woods commenced, and friendships were made.  Friends were pipped at the post and just lost by four shots. Well done the club.

We had a ploughman’s supper after the match followed by scones with jam and cream, cupcakes, coffee sponges, chocolate cakes and more.   Some of our eyes are bigger than our………..!

Terry, the club’s men’s captain, rose to say a few words saying how much they had looked forward to this day and what an enjoyable day they had all had.  Margaret, Philip’s wife, thanked all the helpers, all whom had donated a large number of raffle prizes and all who had given food and made cakes.

Kath replied on behalf of the Friends saying that we were delighted to help with the celebrations and that these special days did not happen by themselves without the hard work of the members and we were very grateful for all their efforts.  She then awarded the top rink on each side prizes, homemade preserves again.  And last, but not least, the Friends ‘ special commemorative glass plaque was presented to Margaret on the Club’s behalf. 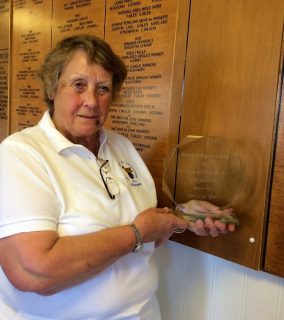 Thank you very much Peacehaven & Telscombe Bowls Club for a most enjoyable day.  Good luck in all you do.  Thank you Friends today represented from eleven counties, for your support for our last Club Runner-up of the Year celebration.   We will miss these occasions.