The FEB Two Wood Pairs took place at Royal Leamington Spa today with 25 Pairs taking part.  The weather forecast was for a sunny day and so it proved, although the wind was still cold.  The draw is made when everybody arrives but the winner will have played 75 ends.

The semi final was contested between Zoe Barnard Rowland and Anna Molony of Avenue Bowling Club, RLS against Marie Borthwick and Sid Barkas of Worcestershire, which Zoe and Anna won 13-8.   The second semi final was between David Williams and Stuart Allinson of Wiltshire against Ken Eichen and John Stone of Hampshire who won 14-8.  This put Ken into his fourth final of this competition (having won it once). 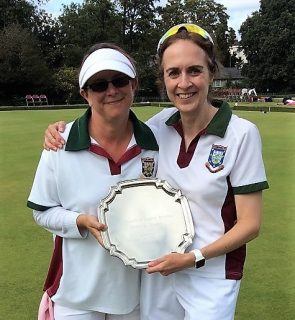 The final was a close encounter until Zoe and Anna picked up a 3 on the eleventh end followed by a four on the next end and carried on to win 16-11.   Congratulations to Zoe and Anna and thanks to everybody who has taken part.