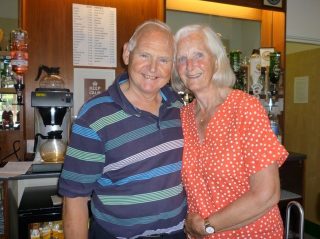 The afternoon started with a superb buffet and of course the bar was open, I was surprised after that lunch that anyone was able to bowls.

Hertfordshire Bowls had many of their Past Presidents playing, going back to the year 2004.  Unfortunately the presence of Don Knight was missing as his car broke down en route, he was President in 1999.  Mike Poole and Graham Marriner were playing for Hertfordshire and both of these esteemed gentlemen are holders of the Certificate of Merit. 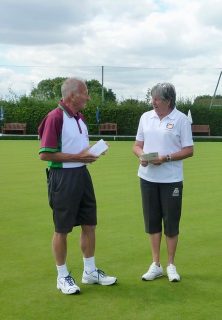 Hertfordshire President Terry Barker welcomed us onto the green and the game commenced.  I don’t know what they put in our lunch but our rinks struggled against a very strong Hertfordshire team.  We had a top rink of  Dawn Grisley, Eileen Taylor, Peter Cottee and Mike Bertrand who won by 1 shot, we  had a rink that drew – they were the highest winning rink with 3 ends to go and then lost the plot!  the players were Maddie McConomy, Richard Peyton, myself and skip Mike Skerry.  The overall score was 93-140.  Listening to the banter and comradeship on the rinks, I know everyone enjoyed their game. 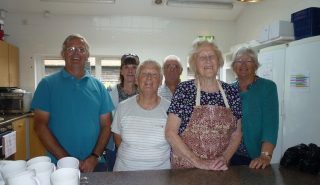 Thank you Hilary Chandler (Past President of Hertfordshire) and her band of helpers for a wonderful meal after the game. 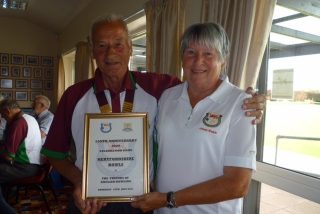 The all-important presentation of the Friends memento certificate.

After the formal speeches and top rink prizes that were handed out by Terry and Jenny, Graham Searle got his fine book out; not only did he fine the Hertfordshire players he included some from the Friends, the money raised was for the Presidents  charity.

At the end of the proceedings Terry donated a large bottle of Brandy for auction which raised £165 also for the Presidents charity; you will never guess who won the Brandy… lets just say Terry won’t have to supply a bottle for the next auction. 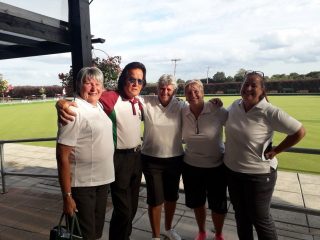 A lot of you missed the final ending to a brilliant day when Don Fox (alias Elvis Presley) sang to 4 of our lady players on the veranda.

Thank you everyone for a wonderful day which was enjoyed by everyone.