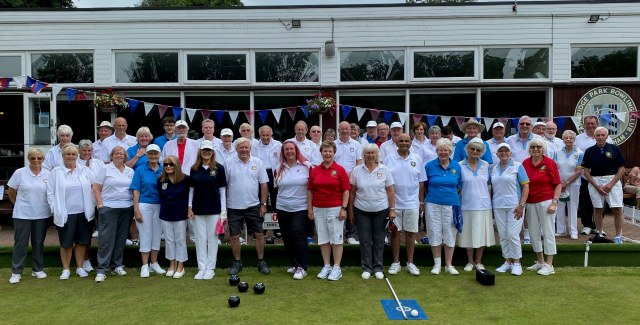 What a pleasure it was to arrive at Cambridge Park and be welcomed by our host, Dawn Slaughter and the other members of Cambridge Park,  including Middx County Administrator Jacquie Elkin.  We were there to celebrate their Centenary this year but it was more than that; it was a celebration of meeting old friends, of being out on the green again, even of remembering the “joys” of travelling somewhere new with an obstinate satnav!

The Friends had travelled from 8 Counties including Beds, Berks, Bucks, Herts, Hants, Somerset, Surrey & Wilts and enjoyed a buffet with a difference on arrival.   All the rolls and sandwiches were individually wrapped in little brown paper bags on appropriately labelled trays with bowls of tomatoes and crisps.  Very novel and kept the bread and fillings fresh and only touched by the caterers.  Great idea and fortunately with the good weather and plenty of space became an outdoor picnic.

The Club has a 4 rink indoor facility built in 1967 (?) with an excellent bar area and good sized dining room and kitchen.  The old club house on the other side of the green, also very large inside, is rented to the local Bridge Club.  The grounds were full of trees and birds and it was difficult to remember that a busy London suburbs was just a short distance away. 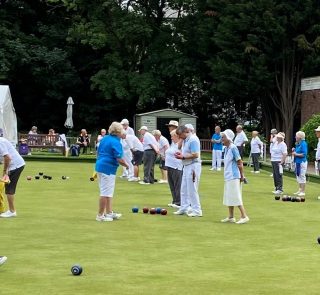 After the welcome by Dawn the game was commenced with six full rinks – quite a novelty at the moment! The green rolled well with a good pace and soon the scores were being added to both sides.  Rinks 1 & 6 were like book ends with the Friends up on Rink 1 and heavily down on Rink 6.  Those on the rinks between were variously for or against.  It was so lovely to hear the banter, the groans, the apologies and to see the faces of people enjoying a good game of bowls. 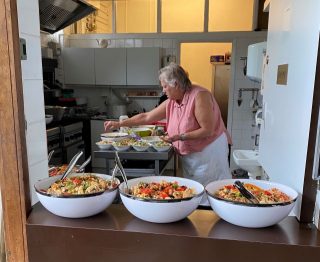 Afterwards we sat down in tables of 6 as per the current rules with the rink skips on 2 tables.  We were provided with an excellent meal by their Caterers who catered very ably for all variations of tastes and allergies.  Afterwards Dawn introduced the National President Paul Robson as well as the County Presidents in attendance; Babs Salter for Wilts and Charlotte Emanuel for Surrey.  I introduced some of the Friend’s Exec and reciprocated her thanks to her band of helpers for making the day such a success.  It was good to see 2019 BE Senior Male Bowler of the Year, David Pitt, at the meal although he couldn’t play in the match.  After giving out Top rink prizes to both sides I presented Dawn with a framed Certificate to commemorate Cambridge Park’s Centenary Celebration with the Friends of English Bowling.

The Result:  4 winning rinks for FoEB and 2 for Cambridge Park but the match score was in their favour by THREE shots.  123 – 126.   However I think we took away the most prizes in the excellent raffle!    Winning rinks:  FoEB:  Sue Sayers, Carolyn Hunt, Paul Robson, Adie Lloyd    Cambs Park: Tricia Green, Scot Lumine, Gym Brown, Steve Gibson 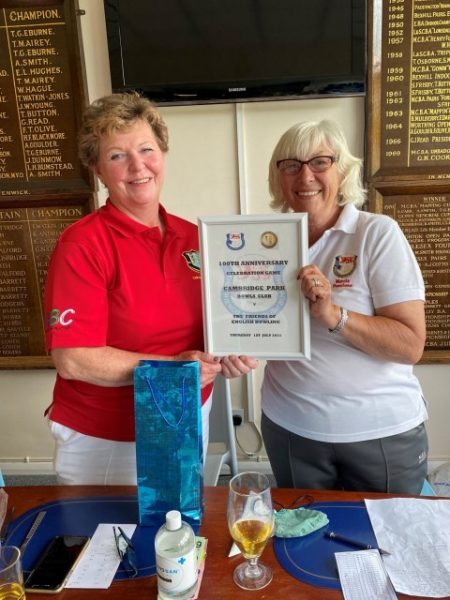 Thank you to both the Friends for their support and to Cambridge Park members for making it a thoroughly enjoyable day.