As I am no longer a member of the executive committee, I was delighted when Kath telephoned me and asked me if I would like to be Captain of the day at Long Crendon.   I did not hesitate to say yes please.   I had no idea that Arsenal were playing away to Rangers on July 17th.  Well someone has got to support Arsenal.  They drew  2 – 2. 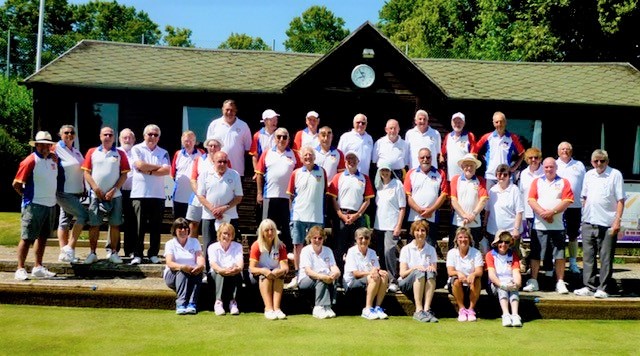 In good spirits the teams line up

On July 17th, 18 people from nine counties made their way to Long Crendon Bowls Club in Buckinghamshire.  We were delighted to join them, to help celebrate their centenary and the opening of their glorious new club house.

We were warmly greeted on arrival by the club President Adrian Smith and the club Captain Alan Quinell.   The boys behind the bar, Chris and Tony, the girls in the kitchen, Jo, Amanda and Pauline, were ready and waiting  to see to all our needs.  Watering and feeding.  The chairs and tables outside, plus large umbrellas to give lots of shade, were up and quickly filled by the arriving Friends. 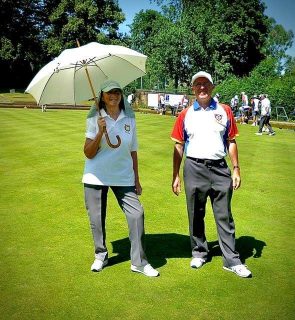 At 2pm, Captain Alan and Captain for the day Cyndy, greeted the members of both clubs and read out the team sheets. 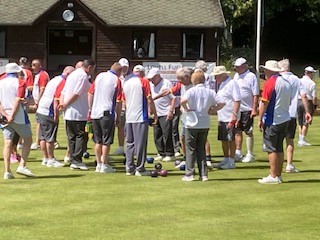 There was a spider before the game with a prize for both the nearest lady and gent.  The Friends won both….   the home team had their revenge when it came to raffle prizes!

A large container of iced water, together with lots of plastic mugs, was placed in the shade so that the teams could keep well hydrated.  Oh boy – did we need it.   The heat was intense and I hope that nobody suffered heat stroke.  I can understand being advised not to go out in the sun between 12 and 3pm.  I can also understand why in hot countries they start at 7am and are off the greens by 11am.  They also have large umbrellas at either end.  If global warming continues we might have to follow suit.

From the laughter emanating across the greens you could tell that everyone was enjoying themselves.   After the match the fun and laughter continued into the club house.  We were at tables of six and I must say that it was the first time I have been in a room with more than three people since Covid 19 arrived.  It is such a lovely large room that I felt quite safe.  Lots of open doors and Captain Alan, bless him, put a large fan in front of our table.

It was the dream of one of the members, Mike Evans to build the club house; he did the drawings and it is such a shame that he never got to see the wonderful job that the project manager, Frank Ashurst together with the club members made of his dream.  There is a lovely stained glass wall (which unfortunately I forgot to take a picture of) with a door leading to the back entrance. 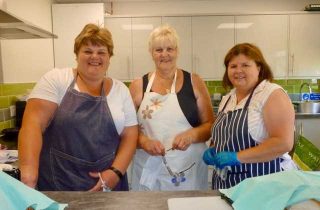 The girls served us with our lovely salads and a choice of strawberry or chocolate and nuts ice cream cones.  What a perfect meal on such a hot day.  The chocolate one was super nice.

Using the Stuart Lake accounting method – we drew 10 all.  The score was Long Crendon 109 – The Friends 82.

Captain Alan then gave all the Friends rather lovely golden pens.  Captain Cyndy then announced the winners of both teams.  Mick, Kevin and Sandy for Long Crendon.  Diane, Sue and Adie for the Friends.  When I gave out the cards I did point out that it was a loaded rink.  So nice to be proven right.  To much laughter, wooden spoons were given to the two losing teams. 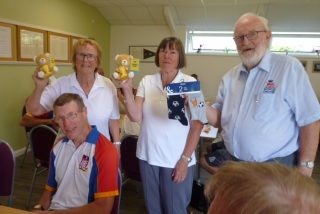 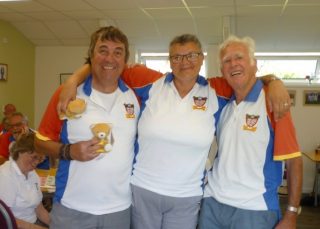 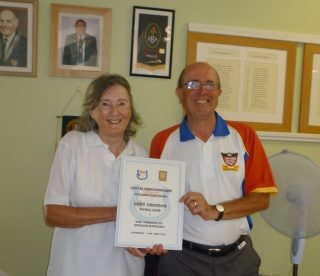 A memento of the lovey day we had spent with new and old friends at Long Crendon was then presented to Captain Alan.  Hopefully we will see it on the wall next time we visit the club.  The Friends have requested an invite to the longest serving member, Mick’s 90th birthday in 18 months time.

Thank you to all at Long Crendon for a truly lovely day.  I am sure the club will go from strength to strength.  A freehold site, a magnificent club house and more importantly – wonderful members.