Day Two of our visit to Portsmouth area and after a brief tour of the roads around the green we found the best place to park and get in!  There are two greens at this location shared by 2 clubs.  The grass green is used by our hosts and the other artificial one used by both clubs all year round.  The surrounding sports area looked very pleasant and the M3 nearby didn’t seem to be too much of an intrusion.  Apparently the M3 doesn’t bother the members but for some reason the football club sited their portacabin by the adjoining hedge and their players use it for target practice; bang, boom, bang, not good for the nerves and concentration during the winter months.

After a welcome coffee or tea and lunch ordered from the catering team led by Paul, and as everyone had arrived early, we were able to get on with the photographs and the Introductions.  However, Fleming Park Vice President Paul had not done a formal introduction on the rink before and his players had their cards were already at their rinks ready to play.  A quick handout of our cards and we were ready for the spider.  The pre-match discussion about the game format being either 18 ends with trial ends or 21 ends and 1 on the first 2 ends somehow changed into 21 ends with trial ends!  We just aren’t used to the long game at the moment.

Two teams of happy bowlers, ready for the game

There followed a close game on most of the rinks and finished up with 3 rinks to them, 2 to us and a drawn rink.  The game overall was a Win for Fleming Park by TWO shots (122-124).  We always say the result doesn’t matter it is the enjoyment of the afternoon, with the new memories and friendships forged.

The top rink for our side was Diane Lee, Ian Pascot, Richard Pearce and Clive Handscombe and for our hosts was Alison Anderson, Mike Betteridge, Paul Bowler and Steve Dowdell (apologies for any misspellings)  The winning margin for both rinks was 12 shots.

An excellent meal provided by their caterers was followed by the usual speeches from both sides with introductions of our Exec members in attendance and some information about Friends for the home side by me – Kath had spread some membership forms on the tables.  Players from 11 counties made up our team and each county name was cheered when announced. (Beds, Bucks, Cambs , Gloucs, Hants, Herefd, Herts, Kent, Oxon, S’Set and Wilts.). 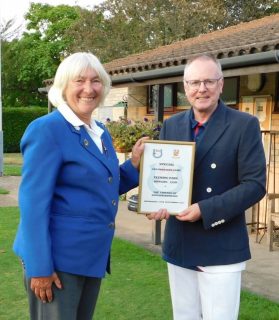 Vice President Paul receiving a memento of the day from Marcia

After giving our thanks to the bar and for the catering and giving out Top rink prizes to both sides I presented Paul with a framed Certificate to commemorate the game with the Friends of English Bowling.

Thank you to both the Friends for their support and to Fleming Park members for making it a thoroughly enjoyable day in the sunshine.  Thank you also for a share of the raffle money donated to the Friends.

Can I also wish club members Jane & Andy all the very best for the Wedding on Friday 24th September and for their future Happiness.

Marcia Dunston, Captain of the Day