Friends v Lockswood BC celebrating their ( delayed from 2020) 30th Anniversary. 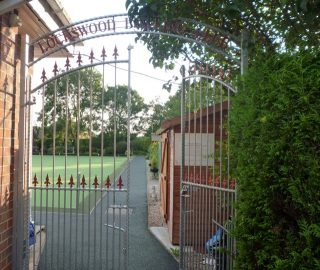 The teams were welcomed to the green by club President Walter on a pleasant September afternoon. Those Friends who had visited Lockswood before were aware that the carpeted surface presented an interesting challenge and they were not disappointed!

The Friends have not been victorious on previous visits, and, although we were slightly ahead for much of the game, a late surge saw our hosts again sneak home by five shots, 116-111, extending their winning run over the Friends to three.

the obligatory pre-match line up 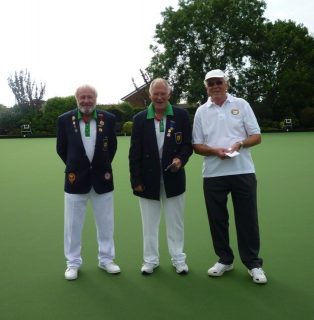 Heroes of the day were Sue Skerry, Margaret Annetts, Paul Robson and Clive Handscombe, who received a small reward for their efforts in winning 26-6.

Those who were the least successful received a much needed Boost chocolate bar to encourage them! 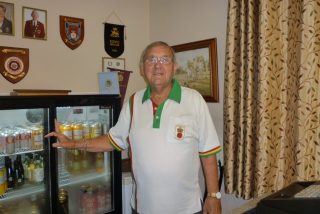 most important – Peter the Barman

After the match we were treated to an excellent meal in the clubhouse and the Friends gained revenge by comprehensively winning the raffle, one Friends household gaining both a tub of Heroes and one of Celebrations ready for the journey home.

Lockswood did us proud and I am sure everyone had an enjoyable afternoon.