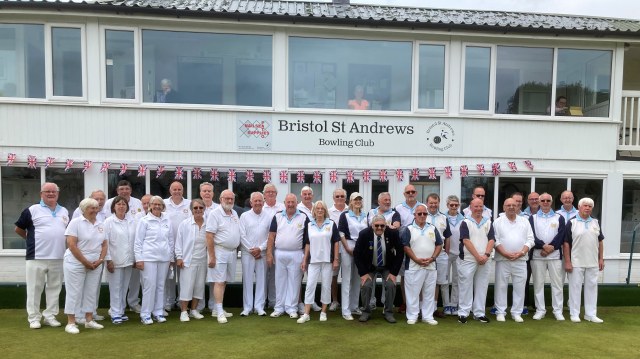 The teams are ready, but hoping the rain keeps away!

With most of the Friends team driving through heavy rain en route to Bristol, prospects for play looked unlikely, but as we arrived some very wet members of our hosts had just completed a competition and assured us that the green, though heavy, was playable.  The club vice-captain, Keith, beat a hasty retreat home to change into some dry clothes following his morning soaking, and by the time everyone had had some lunch and got changed, miraculously the sun appeared in time for our 2 p.m. start. 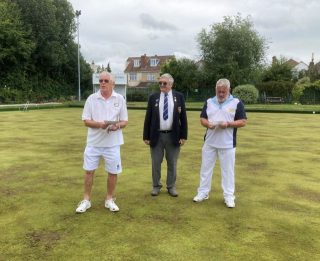 Welcome All from Captains of the Day Graham and Keith

Although the weight of the green was challenging, a most enjoyable match followed, avoiding further rain even if some of the passing clouds looked threatening, with the Friends winning two, drawing one and coming second on the fourth rink to win overall by 60 shots to 49.  The rather loaded rink of Kath Lloyd, Marcia Dunstone, Barry Dillon and Clive Handscombe was the most successful of the Friend’s team, with John Thompson’s rink a close second.

We were treated to an enjoyable meal after the game, with the chocolate dessert proving very popular with both teams!

The Club President, John Pearce, outlined some of the work that the members of Bristol St Andrew’s had done in recent years to improve their clubhouse which was in a poor state of repair.  He presented their Captain of the day, Keith Boyland, with a plaque recording the financial help they had received from the Ibstock Trust which will be displayed in the clubhouse. 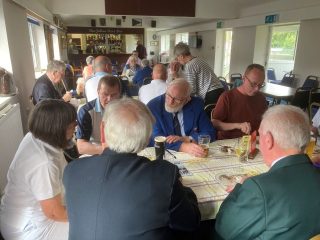 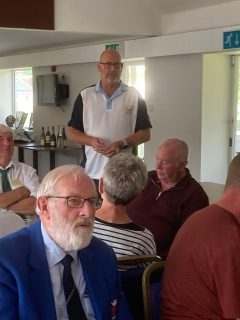 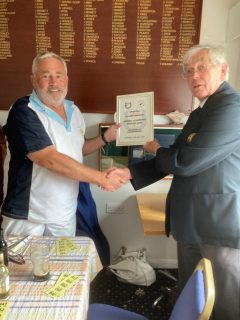 The Friends Captain of the day handed Keith our customary framed certificate of the occasion and after mixed success in the raffle, everyone set off for home at the end of a most enjoyable afternoon, many of the Friends team hoping to return in 2024 to celebrate the club’s centenary.