the teams all ready to play

With an important meeting taking place at the adjacent football club, we arrived to find the car park somewhat congested, but fortunately the nearby shoppers car park charges were sensible, and spaces were available, so as they say ”problem solved!”

The purpose of the Friends visit was to celebrate the completion of Leigh Park’s newly upgraded clubhouse, and the very warm sunny weather certainly mirrored the warm welcome we received from the club.  The splendid clubhouse was completed during the pandemic, but the new facilities are certainly impressive.

Unfortunately, both the Club President and Club Captain had succumbed to Covid a couple of days before the match and were unable to attend, but Vice President Jim proved an able deputy 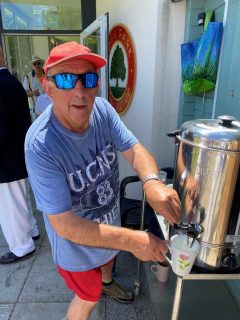 Paul, in charge of a welcoming drink

We all enjoyed a cooling drink after our journey, accompanied by rolls prepared for us by the club members, and were refreshed and ready for the start of the game. We were slightly concerned that one team member had been delayed in the car park known as the M25, but he managed to appear by the end of the trial ends, so the Friends were at full strength!

The two captains had agreed to a short refreshment break halfway through the game on such a hot day, and this proved a wise decision, even if, as so often happens, fortunes changed after half-time on some rinks!  The Friends Captain of the Day pronounced that the match was a draw but admitted that he had been forced to use some very creative mathematics to achieve this result!

After the game we all enjoyed a “Ploughman’s Tea” provided by the ladies of the club, which included some very popular chocolate gateau and cheesecake.  Following the meal, the highest winning rinks from each team received a small reward, with some encouragement given to those who were less successful.  The usual suspects amongst the Friends present profited from the raffle, the rest of us made a contribution to Club Funds! 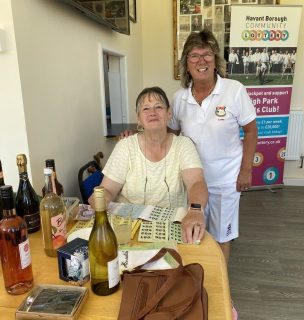 Sue – in charge of the raffle… with ‘a Friendly’ Lesley 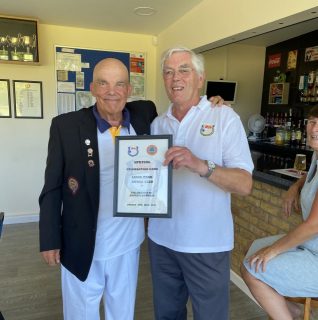 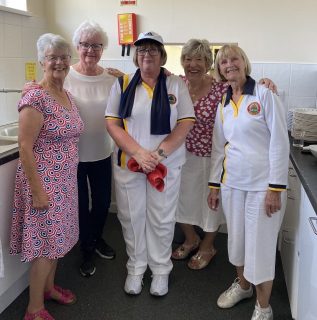 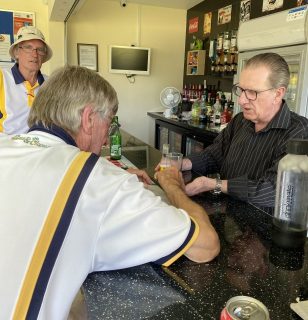 A photo of Jack (don’t tell him!) hard working at the bar

As this was the first game of the four-day visit to Hampshire, many of the Friends were staying at various locations in the Portsmouth area ready for the next game, while those living in nearby counties set off for home after a very enjoyable day in the Hampshire sunshine.

Graham Annetts
Captain of the Day