Saturday, 16th July at Supermarine BC 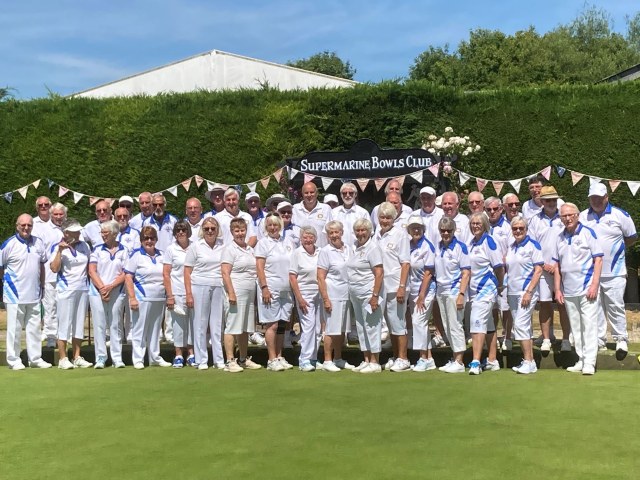 I arrived at the car park by Supermarine BC to find we were sharing it with a very well supported junior sporting event nearby.  The club members acting as marshals had our parking area roped off but once they saw i had no children in the car the rope was dropped and i was allowed in.

After lunch we assembled around the green and Club Captain Mick Kilburn welcomed us to Supermarine and to a match celebrating their 75th Anniversary.  As it was a hot day we decided on 18 ends with one on the first 2 ends and no 3s up.  After a Spider, won by Clive Handscombe, the game commenced.  A few awnings & large umbrellas had been very thoughtfully erected at the ends of the rinks, providing much needed shelter from the sun and heat for players and visitors.  During the game we were treated to an air display from the Red Arrows and other aircraft flying at the Royal International Air Tattoo at Fairford.  The game continued with the plenty of banter and laughter, but it was a relief to reach the end of the match and head indoors out of the heat.  Mad dogs & English bowlers come to mind!

President Marilyn and her team had a lovely meal prepared for us, with a choice of roast lamb or chicken plus all the variations according to dietary requirements.  If that was delicious then the best was to follow.  Rink by rink we were invited into a room with tables laden with mouth-watering choices of dessert with cheese & biscuits and port to follow.  Wow!  Sadly, I was driving home after but I’m sure others took advantage. 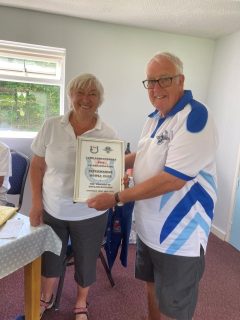 Mick Kilburn receiving memento of the day from Marcia Dunston

Mick welcomed the Friends and our Chair, Kath, in his speech and gave us a little of the history of the club.  I in turn introduced our Exec including Adie and Clive and 3 past Presidents of Bowls England including Adie, Stuart Lake and me and the current Junior Vice, David King-Taylor.  Players from 11 counties made up our team and each county name was appropriately cheered when announced. (The Royal County of Berks, Bucks, Cornwall, Gloucs, Hants, Herts, Middx, Northants, Nottingham, Oxon and Wilts).  The score was 117 to 73 with five winning rinks for the Friends and one to our hosts.  Prizes were given out and it was my pleasure to present the club with the Framed Certificate marking our visit. 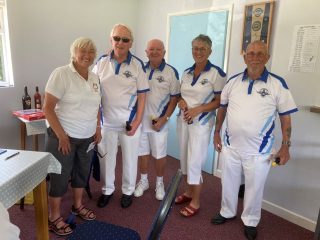 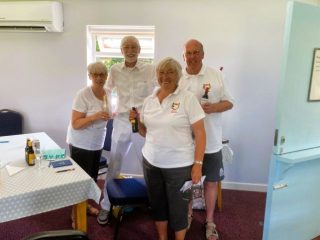 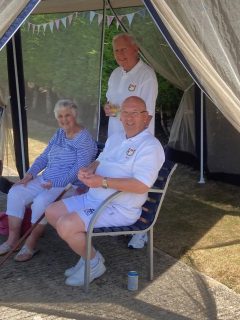 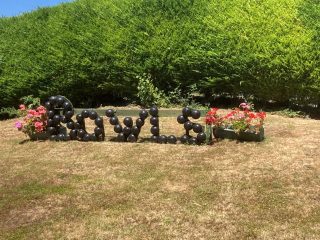 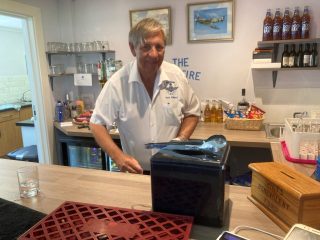 a most important gentleman 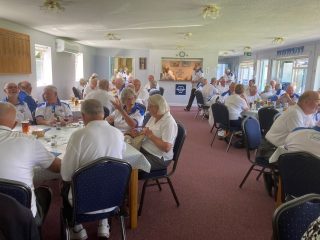 always lots to say over dinner

Thank you to both the Friends for their support and to Supermarine members for making it a thoroughly enjoyable and memorable day on the hottest weekend so far this year.

Marcia Dunstone
Captain of the Day