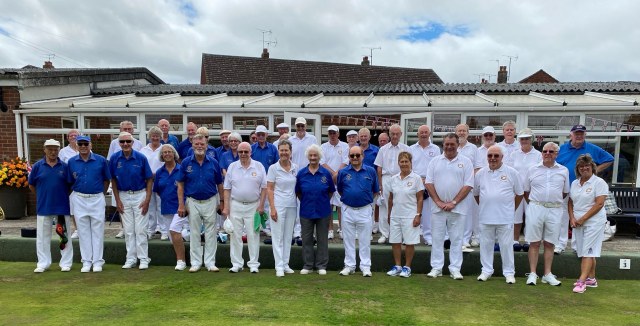 A warm welcome met the Friends, arriving from 10 different counties.  President Olive Goodwin escaped from the kitchen to greet us, offering a welcome cup of tea.  She and Sue had prepared a buffet lunch for us and would be working later preparing dinner.  Today we were playing 5 rinks, 21 ends, and straight through. The weather stayed fine – warm but overcast with a grateful breeze.

After assembling for a group shot, captain Henry welcomed all and once the teams were called, we played a spider.  The funds will be going towards a defibrillator.   There was plenty of noise on the green during play as we all tried to master the fast green.   The game went particularly well for the Friends, as we won on four of the five rinks.   Andy Hunt, Jim Allen, Richard Pearce and Janet Farnsworth, won the highest winning rink, and the winning rink for Leominster, John Robins, Jacqui V-Jones, Jimmy Lindsay and Glyn Lloyd. 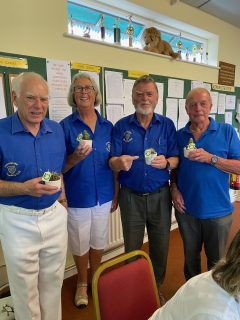 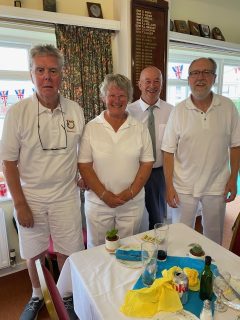 We all enjoyed dinner, salad, followed by so many people’s favourites, trifle!  Olive had made one for each table, and they were delicious. There were many people to thank for helping the day go well.  Greenkeeper Ted, Val & Mike manned the bar, catering was provided by Olive, Sue, Polly, Jen, Miranda, Mary, Richard & Randy who looked after the raffle.  They were duly thanked by both captains. 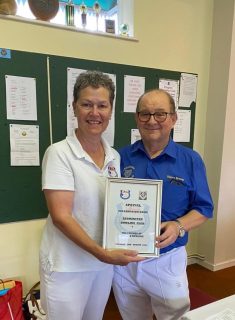 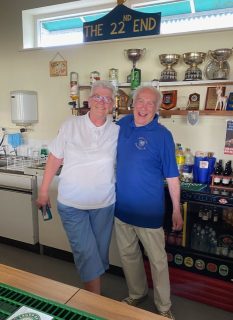 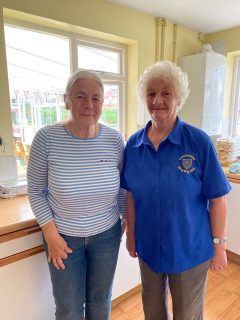 stalwarts of all refreshments, Sue and President Olive (who made lovely trifles)

Captain Carolyn rewarded the top rinks on both sides with mini cacti, and presented captain Henry with a certificate from Friends, as a memento of our visit. We had such a lovely day and would love to come back some day.

Carolyn Hunt
Captain of the Day