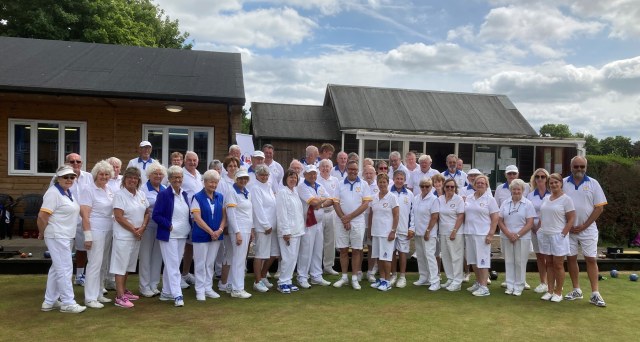 Arriving at Henlow several bowlers from Bedfordshire had already played at other clubs in a local Bedfordshire Competition, so they were fully warmed up.  We were disappointed to learn that their President would not be in attendance as he and his wife had both caught Covid (it’s still about).  It was also a big disappointment for Bob Hirst, as he had been waiting 2 years for this game.  We were all looking forward to seeing him serving the drinks as he is now known as ‘Bob behind the Bar’.

As Bob their President was absent, as was their captain, it was Graham Jakes who took the responsibility of Captain of the Day for Henlow Park.  The game was played under a cloudy sky but there was plenty of laughter and chat across the rinks, as there always is at these games, and it stayed dry although it turned a little chilly towards the end of the game. 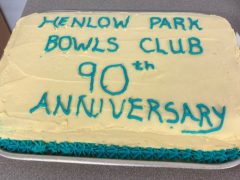 After the game we enjoyed a buffet style meal and cakes, proved by the lady members of the club, which included a lot of home baking.  It was all very nice and not much was left at the end.  There was also a home-baked celebration cake which I was invited to cut, and all bowlers were invited to take a slice home with them.

It was then time for speeches and we had players from 10 counties at this game including two BE Past Presidents.  The result of the game was 131 – 109 to Henlow Park. 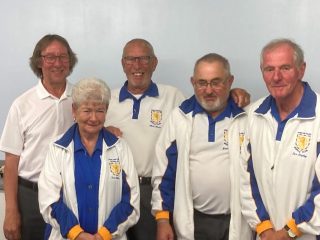 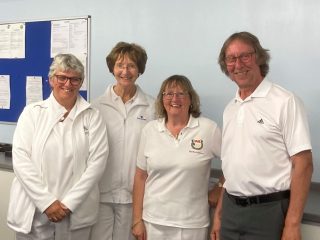 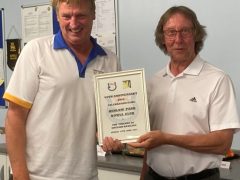 A memento from FoEB presented to Captain Graham

Our memento Certificate was presented to Acting Captain Graham Jakes, and thanks given to all the catering staff, bar staff, and of course the green staff for a very good green to bowl on, and all other members who had helped to make it a great day.

Mike Bertrand
Captain for the Day
Friends of English Bowling

The teams all ready to play

The day started with a fresh breeze, but the Sun came out and it was a glorious afternoon.

We received a warm welcome on arrival and were treated to a wonderful meal after the match and given sustenance from the well-stocked bar. 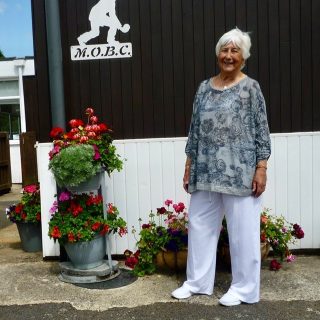 Annette who greeted the early arrivers with a cup of tea 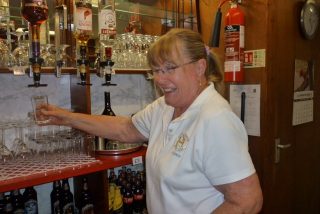 Jeannie – in charge of the bar, the green, and the flowers – and on the top rink!! 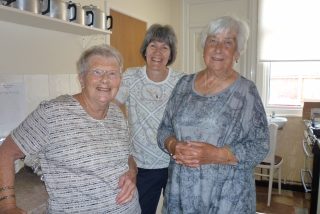 The match, on four rinks, was played in the usual good spirit and after 21 ends we ended up on top with a close 87 – 72 win.

Market Overton’s captain, who skipped for rink 3,  gave the excuse of being “sporting” by allowing the opposition to win!!.

The winner in the end was the game of bowls and everyone seemed to enjoy the day. 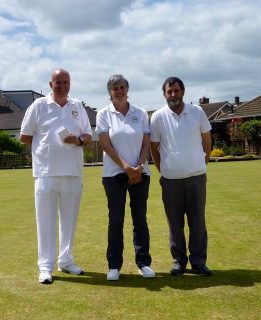 President Johnny with Captains of the day 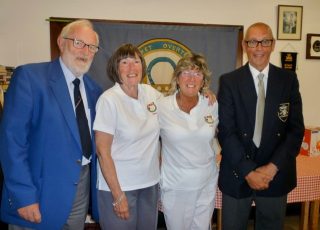 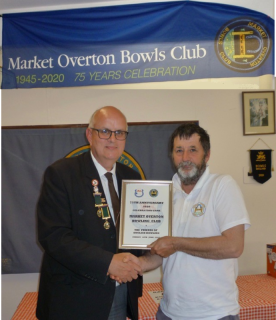 Clive Handscombe
Captain of the day 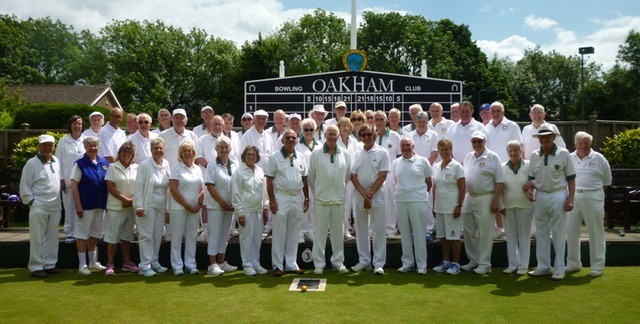 Oakham and Friends’ players looking forward to their game

The journey began in full sun, but approaching Rutland Water, and Oakham Bowls Club,  clouds were in abundance.  Fortunately the clouds produced only a few spots during the game and most of the time we played in sunshine, as it should be for an outside sport in Summer!

We were welcomed with tea and biscuits and introduced to Rutland’s Vice President Graham Cole and Captain Alan Jones.  Alan remembered the Friends visiting back in 2010 for their Centenary year. 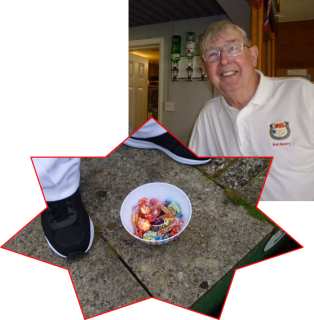 The game started with 3 rinks shooting off into a lead that reached 41 – 13 at 10 ends and a fourth rink also in front.  After that Oakham started to get back into the game which finished 105 – 110 win for Oakham with Friends winning on two rinks only.   We were all ready for the after match meal.

It was then time for speeches and I was able to tell them a little bit about the Friends achievements and our purpose in bowls.  We had players from 11 counties at this game,  including 5 from the Friends Committee and BE Immediate Past President Paul Robson. 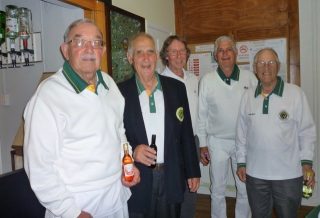 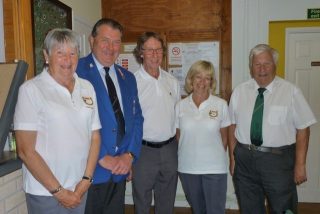 You may notice that there is one missing face in the photos.  Richard Somerton was top rink Captain in the last three games but today he was highest losing rink.  I am sure he will be trying to get back on top in his next game.

I presented the Certificate of our visit to Graham and Alan and thanked all the catering staff, bar staff, green staff for a very good green to bowl on and all other members who had helped to make it a great day.

Finally all players stood and gave a rendition of ‘Happy Birthday’ to Mike Skerry a ‘Friend’ who was another year older although not as old as the club. 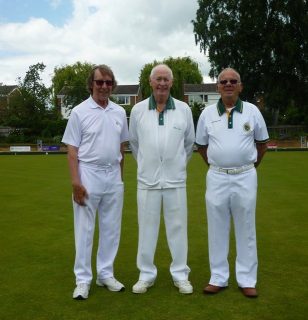 The two Captains, Mike & Alan with V-President of Oakham BC, Graham Cole 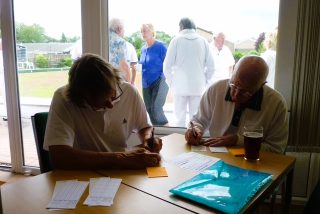 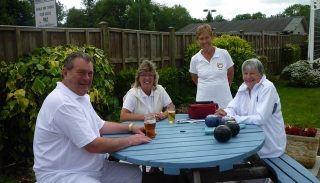 Past President of BE enjoying a drink with Lesley, Maddie and Jenny before the game 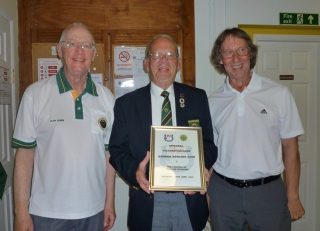 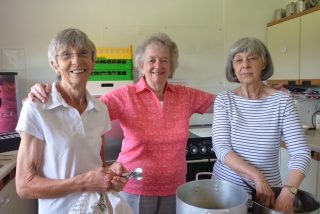 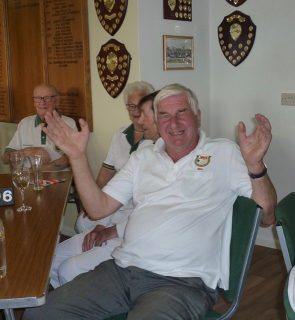 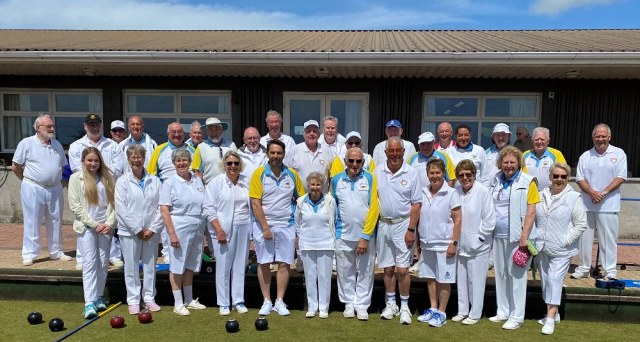 The teams line up in the sunshine

After a couple of wet days playing in Devon in the final game of the week, The Friends’ team were relieved to play in the sunshine at Bere Alston, a club with only 30 playing members with excellent clubhouse and facilities.

We were greeted at lunchtime with very nice sandwich’s, sausage rolls, and a selection of Home made Cakes (yummy yummy). 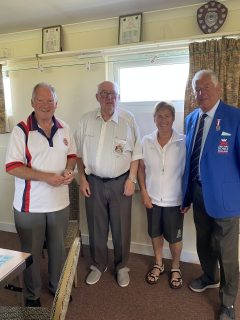 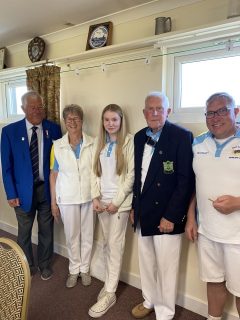 The Friend’s team were represented by 10 different counties –  a great turnout considering we were just one mile from the Cornish border.  A nice meal was prepared afterwards by Ivor, Jean, June, and Mike volunteer club members doing their first catering duties.  Well done to you all I am sure you will be requested again and again. 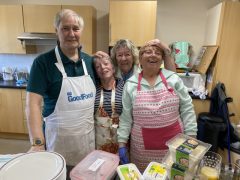 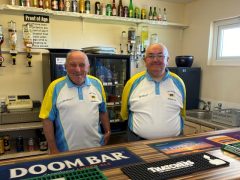 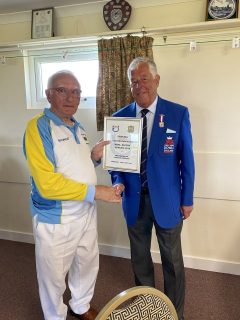 All good things have to come to an end and after a lot of chatter and excellent hospitality by our host’s,  Captain of the Day Bill Smith presented host Club Captain Jim Horrell with a framed certificate to mark the occasion.

A great day making new friends and catching up with old ones.